The Amelia Earhart Room      Renovated 2017
Born in Atchison, Kansas, Amelia Earhart traveled an uncommon road from small-town America to the pinnacle of success and celebrity -- only to literally disappear off the face of the earth in 1937 on the last leg of her ill-fated "round-the-world" flight.

Earhart's name became a household word in 1932, when she became the first woman -- and just the second person -- to fly solo across the Atlantic Ocean. That year she received the Distinguished Flying Cross from Congress, the Cross of Knight of the Legion of Honor from France, and the Gold Medal of the National Geographic Society from President Hoover.

In January, 1935, Amelia became the first person to fly solo across the Pacific Ocean from Honolulu, Hawaii to Oakland, California. Later that year she soloed from Los Angeles to Mexico City and back to Newark, New Jersey.  In July 1936 she took delivery of a twin-engine Lockheed 10E "Electra", and started planning her ill-fated "round-the-world" flight.

Her flight would not be the first to circle the globe, but it would be the longest, at 29,000 miles, following the equatorial route. Fred Noonan, a former Pan Am pilot, would be Earhart's navigator and sole companion in flight for the entire journey. They departed Miami on June 1, 1937 and completed 22,000 miles by July 2nd before launching from Lae, New Guinea, aiming for Howland Island -- a tiny speck of land a few miles long, and just 20 feet above sea level.

Howland Island was 2,556 miles away, but in the interest of saving weight she had left behind her low-frequency radio equipment -- the very equipment that might have allowed the Navy's U.S.S. Itasca to locate her. When they couldn't find the island, their transmissions to Itasca grew weak, and it was obvious that they had no idea where they were. After six hours of frustrating attempts at 2-way communication, contact was lost, and Amelia flew into history.

You can taste some of the mystery and excitement of her life and times in our Amelia Earhart room. Decorated to reflect her era, this no-pet room boasts every amenity, including a refrigerator, microwave, single-cup coffee maker, 32" flat-screen HDTV, and two queen beds. Artwork and memorabilia commemorating her historic life and flights hang from every wall -- and you'll  receive our signature "delivered-to-your-room" continental breakfast during your stay! 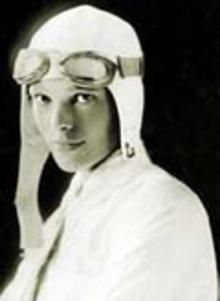