It even sounded luxurious -- and it was!  The last great propeller-driven airliner, the "Connie" (as she is affectionately known by all who have flown her) was the largest, most lavishly-appointed airliner of the 1940s and '50s -- the era when airline travel was on a par with the cruise ship lines for both luxury and class.   She is almost universally considered to be the most beautiful airliner ever built.

Unlike flying today, this was a time when men wore suits, women wore gloves, and children -- if they were good, and lucky -- were allowed a glimpse of the pilot-gods who flew these awesome aircraft.   Most of the pilots were Air Corps veterans of World Wars I or II, and some had even flown the early air-mail runs, back when your arrival was NOT assured.   Piloting this queen of the skies was considered the pinnacle of any pilot's career, and only the "best of the best" flew the left seat of a Constellation.

Our no-pet Constellation Room echoes those times.  Thanks to the crew of the MATS Constellation -- one of the last flying examples, and also our first guests at our first Iowa hotel back in August of 2002 -- we are blessed with several beautiful Constellation limited-edition prints on the walls, as well as other "Connie-goodies" throughout.

And, of course, the Connie comes with our signature "delivered-to-the-room" continental breakfast basket each morning, made up of a variety of made-to-order bakery items, fruit, coffee, teas, and the morning newspaper -- all at no extra charge! 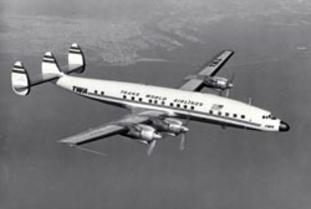