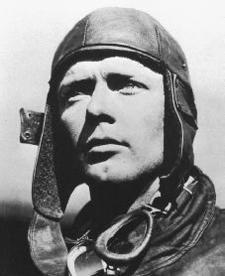 The year was 1927. The Atlantic Ocean had not yet been conquered solo by air. Substantial cash rewards had been offered to the first successful pilot, but no one had been able to claim the prize. Several attempts were made, and the pilots were never heard from again...

Charles Lindbergh did it, and flew into history. Over 8 decades later, it's astonishing how many people still know his name, and the story of his life. And what a life it was!

After he made the first non-stop solo flight from New York to Paris, in a tiny silver monoplane called the "Spirit of St. Louis", Lindbergh's existence took on the quality of myth. Overwhelming celebrity followed him home and around the nation on his goodwill tour promoting aviation.

Fame continued to follow him on a tour of Mexico, where he met the U.S. ambassador's daughter, Anne Morrow. They married two years later, and traveled the world together as pioneer aviator-explorers, mapping air routes for the fledgling airline industry. Together they navigated by the stars and watched the great surfaces of the earth revealed beneath their wings. Land, sea, and air, all of seemed to be theirs!

Our "Charles Lindbergh" room pays homage to that great era of exploration, when aviation was new, departures were infrequent, and arrival was uncertain. But you won't be "roughing it" like "Lucky Lindy" did! Enjoy two queen beds, a 32" HDTV, a microwave, refrigerator, and single-cup coffee maker.

Your stay will include our signature "delivered-to-your-room" continental breakfast basket, made up of a variety of fresh bakery items, fruit-cup, granola bar, coffee or tea.  This room is directly across from the pool and grilling area.

Note: This room adjoins with the Van's RV Room. Reserve both, open the common inner door, and enjoy a giant 4-bed suite!

To specifically reserve the Charles Lindbergh Room, please call us at 361-416-1777.  To reserve the next available double-queen room on-line, click here.

Click a thumbnail, below, to see pictures of the room.