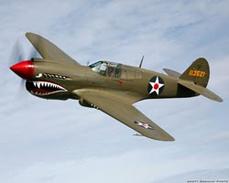 In 1941, with the world at war but America on the sidelines, three squadrons of 20 aircraft each were formed by American volunteers in the Chinese Air Force -- the Flying Tigers.  They were mustered for the express purpose of fighting the Japanese, who were then over-running the Far East at an alarming rate.

Their equipment was obsolete. Their facilities could best be described as "crude".   Nevertheless, they racked up nearly 300 victories, against a loss of only 14 of their own, during the brutal early days of the war, when most of the news was bleak, and allied triumphs were rare.

Their existence as volunteers was brief.  By July of 1942, seven months after Pearl Harbor, they were officially absorbed into the U.S. Army Air Corps' 23rd Fighter Group.  Still, they continued to call themselves "Flying Tigers", retaining their unique shark's mouth paint jobs, and instilling unbridled fear into their enemies. The group produced 19 "aces" -- men who had downed 5 or more enemy aircraft in air-to-air combat..

Our no-pet "Flying Tigers" room pays respect to the brave men who gave their all for freedom, (and earned the equivalent of over $100,000 per year, in today's money, courtesy of the Chinese!).   Enjoy two Queen-sized beds, a 32" HDTV, a microwave, refrigerator, single-cup coffee maker, and an easy walk to tenderly cared for pool and bbq area.

This room sports many unique Flying Tigers details. Two large-scale P-40 Warhawks hang from the ceiling, chasing a Japanese Zero! A shadow box houses a rare Japanese tapestry, given to a Japanese pilot by his family when he went off to war.  A painting, autographed by many members of the Flying Tigers, hangs on one of the walls.  Most of them are gone now, but their memory lives on.

Your stay will include our signature "delivered-to-your-room" continental breakfast basket, made up of a variety of fresh bakery items, fruit-cup, granola bar, coffee or tea.

Click a thumbnail, below, to view pictures of the room: