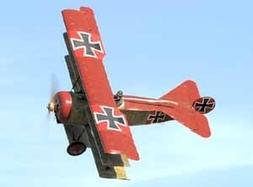 Born in Prussia to wealthy aristocratic parents, Manfred Frieherr von Richtofen -- "The Red Baron" -- was to become the top ace of World War I. With 80 confirmed kills (and many more that could not be confirmed) Richtofen easily outpaced his nearest competitor.

His first confirmed victory was recorded in September, 1915. By November he had already scored eleven kills, including Major Lance Hawker, the top British fighter pilot. With his keen reflexes and eyesight he quickly ascended in both score and rank. By 1917 he was in command of the unit that would become known as "The Flying Circus", the scourge of the Western Front.

Wounded in combat, he would return with a vengeance, becoming a vocal proponent of his new steed, the Fokker Triplane. The bright red paint scheme of this aircraft would earn him the nickname that echoes still to this day -- "The Red Baron".

When he finally fell victim to the perils of combat in 1918, even his enemies mourned. Provided a full military funeral by the Allies -- his enemy -- the Germans were amazed when a single British fighter plane flew over their lines to drop a package containing photographs of Richtofen's funeral onto the "Flying Circus'" headquarters!

Experience those bygone days of gallantry and honor in our "Red Baron Room" -- a large, double-queen, non-smoking, pet friendly ($30/dog, per night, up to a maximum of $100 in any month) room with two queen beds, a full kitchen, refrigerator, 10-cup coffee maker, stove, oven, microwave, refrigerator, 32" HDTV, DVD player, and breakfast delivered to your room each morning -- plus a deck overlooking the pool!