From 1963 to 1972, NASA (the National Aeronautics and Space Administration) created a transportation system that could take American astronauts to the surface of the moon and bring them safely back to Earth. The name of this system was "Project Apollo".

The object was to beat the Soviet Union -- leaders in the "Space Race" till that point -- to the moon. To that end, eleven Apollo missions were flown, with six of them landing on the moon. From 1969 to 1972, twelve men stood on the moon, gazing back that tiny blue marble floating in the inky blackness of space -- Earth. Our perception of the world changed forever.

This national effort cannot be underestimated. The Apollo program absorbed the imagination, scientific output, and efforts of an entire generation of Americans. The Saturn V rocket that carried three astronauts and all their equipment into orbit was the largest operational launch vehicle ever produced.  Standing over 363 feet tall, it produced 7.5 million pounds of thrust at lift-off, and produced the second loudest (after the atom bomb) sound ever heard on Earth.

Our no-pet "Apollo" room echoes those "can-do anything" 1960s. Most of the artwork was obtained during our 2004 visit to the Kennedy Space Center in Florida, but several items were contributed by Mr. Jim Weir, a young engineer in the Apollo Program.

Don't worry, though -- it's not all 1960s in there! Your room sports 21st-century amenities like queen-sized beds, a microwave oven, 10-cup coffee maker, refrigerator, 32" HDTV, DVD player, and free access to our aviation movie library.

Your stay will include our signature "delivered-to-your-room" continental breakfast basket, made up of a variety of fresh bakery items, fruit, coffee, tea, and the morning newspaper.  This room is directly across from the pool, hot tub, and grilling area. 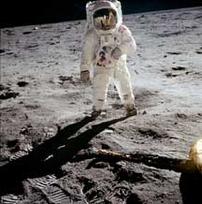