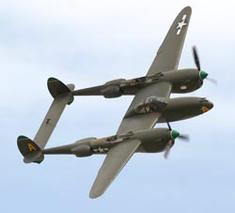 The Lightning Room      Renovated 2018
The Lockheed P-38 Lightning was the most advanced fighter plane in the world when it first flew in 1939. With its unique twin-engine/twin-boom design, there was no mistaking a Lightning when it appeared in the sky.

Great speed, twin-engine safety, and incredible, concentrated firepower made the P-38 the most feared Army Air Corps aircraft in the Pacific Theater during World War II. Richard Bong, from Poplar, Wisconsin, flew the P-38 to 40 aerial victories, becoming America's "Ace of Aces," and the highest scoring American ace of all time.

The Lightning was the first successful aircraft to emerge from Kelly Johnson's legendary "Skunk Works" -- the small, super-secret, west coast workshop that would later produce the Mach 2-plus F-104 Starfighter, the U-2 spyplane, and the revolutionary and awesome SR-71 Blackbird.